The equity markets advanced during a month when the Delta variant ravaged some states, which reinvigorated flagging vaccination rates. Positive developments, such as a bi-partisan infrastructure package, were overtaken in the news cycle by the tumultuous exit from Afghanistan. The month finished with Hurricane Ida’s one-two punch to the South and the Northeast. The big miss on August employment numbers (released September 3rd) underscored the potential for damage that the Delta variant may hold for our still-recovering economy.

Let’s Look at Some Recent Highlights

THE MONTH OPENED WITH GOOD NEWS

The ISM Services PMI index, which tracks non-manufacturing industries, was 64.1 in July (an all-time high) and 61.7 in August.  Any number over 50 indicates growth.  August’s reading marks 15 consecutive months of service sector growth. With roughly 67% of our GDP attributed to the service sector, reports like these are a positive sign for our economy.  It’s been good for a while, but the last few months have surpassed what we have averaged over the last previous 12 months, making these particularly strong.

The University of Michigan consumer sentiment index was a big downside surprise. U.S. consumer confidence fell in August to the lowest level since 2011.  This seems to be related to the resurgence of COVID-19 and its potential impact on the economy.  The consumer sentiment index fell 13.5% from the July reading to 70.2. Believe it or not, that’s a more bearish outlook by consumers than readings in April 2020.

AND THE POLITICAL BATTLES HEAT UP

Somewhat lost behind the Afghanistan debacle and the release of the vaccine mandates, budget reconciliation battles are heating up.  When Biden was first elected, by far and away, the majority of the questions we received were related to tax increases to fund big spending under the new administration.  We are about to see some more details on what that may look like.  In the coming days, we should see more details.

We wrote earlier this year that with only a slim margin of  Democrats in the Senate, things would be difficult for them.  Fast forward six months and the Democrats have a big in-fight.  Republicans and Democrats split the Senate evenly, with the tie-breaking vote belonging to the Vice President and the Democrats.  That razor-thin majority that they cannot lose a single Democrat vote to pass their bills.  While progressive Democrats are proposing a 3.5 trillion spending plan, moderate democrats like Joe Manchin are balking at that, instead saying he will not agree to anything over 1 to 1.5 trillion dollars.  The actual number will probably fall somewhere in between, but the hope here is that moderates will tame some of the more extreme ideas.

On the tax side, the House Ways and Means Committee has proposed increases that already watered down Biden’s original campaign promises. The plan would increase the top corporate tax rate to 26.5% (from 21% currently) and the top individual rate to 39.6% (from 37% currently).  It’s the initial salvos; there will be a lot more details and negotiations forthcoming as the Democrats try to craft a passable bill.  At this point, it’s reasonable for high-income individuals and corporations to expect tax hikes next year.  Stayed tuned for more information as it unfolds. 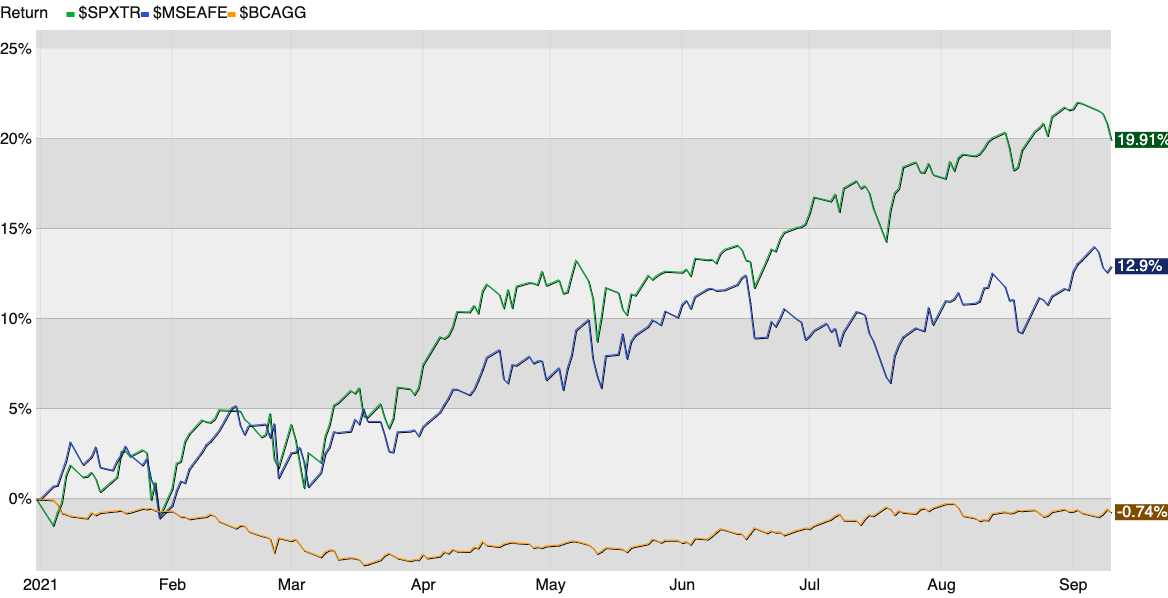 The idea of a “new high” is starting to seem like unexciting, everyday news.  Through 9/3/21, the S&P 500 has already hit 54 new all-time closing highs.  The record year to beat is 1995, with 77 new closing highs. The month of August had 22 trading days, and the market posted new closing highs on 12 of them.

For investors, while equity markets are still booming right along, volatility is likely to increase, and bond markets may continue to struggle. With four months left in the year, the Bloomberg Barclays U.S. Aggregate Bond Index is still in negative territory.

Reviewing portfolio assets to ensure that your income needs are met and that you can withstand potential volatility always makes sense. With the strong gains this year, it may also make sense to tune up asset allocations, as outperformance may have pushed risk parameters out of alignment.

The Standard & Poor’s 500 (S&P 500) is an unmanaged group of securities considered to be representative of the stock market in general. The Bloomberg Barclays US Aggregate Bond Index is a broad base, market capitalization-weighted bond market index representing intermediate-term investment-grade bonds traded in the United States and is used for measuring the performance of the US bond market. Indexes are unmanaged and do not incur management fees, costs, or expenses. It is not possible to invest directly in an index. The MSCI EAFE Index is a stock market index that is designed to measure the equity market performance of developed markets outside of the U.S. & Canada. It is maintained by MSCI Inc., a provider of investment decision support tools; the EAFE acronym stands for Europe, Australasia and Far East.