Can we catch a break in the “roaring ’20s?” Just when it seems that the economy is putting COVID-19 in the rear-view mirror, a new market-driving headline takes its place. We won’t know the full impact of Russia’s decision to invade Ukraine for some time, but everyone is feeling some of the effects already.

Let’s Look at Some Highlights:

WAR ADDS TO THE INFLATION STORY

Russia is the world’s third-largest oil producer and the second-largest natural gas producer. It accounted for about 11% of the world’s oil supply in 2021. With some companies refusing to do business with Russia and Governments clamping down on Russia’s economy, the global oil supply is in shock. In February, before the invasion, prices went from around $90 per barrel jumping to over $130 intra-day on March 8th, before falling to about $95 today on March 16th. Other commodities, such as wheat, Nickel, and fertilizers, also feel supply shock, causing their prices to increase dramatically.

PUTTING THE FED IN A TOUGH POSITION

The February inflation report showed inflation rose by 7.9% year-over-year from rising food, rent, and gas prices. We expect food and gas price increases to be even more pronounced in March. This puts the fed in a challenging position. They need to take actions to stem the rising inflation but not tighten conditions so much that it puts an already slowing economy into recession.

This afternoon, March 16th, the Fed made a widely telegraphed move and increased rates by 0.25%. This isn’t a surprise, or new news, to the markets as Jerome Powell basically told Congress in March that’s what the Fed intends to do. The bigger story revolves around what happens next. The Fed has six more meetings in 2022, and each of those should be considered “live” with the possibility of further hikes. Additionally, the Fed could decide to raise rates in larger increments than just a quarter of a percent in the future.

All this bears to watch. It’s become painfully clear that The Fed was behind the curve and should have started rate hikes sooner. The tightrope balancing act now becomes how to moderate the sticky parts of inflation without killing growth. It’s a Goldilocks story; it needs to be just right. Tighten too fast and increase the risk of recession. Tighten too slow, and hot inflation has the potential to linger. They know they are in a tough spot.

In his testimony to Congress, Fed Chairman Powell recently said: “The near-term effects on the U.S. economy of the invasion of Ukraine, the ongoing war, the sanctions, and of events to come, remain highly uncertain. Making appropriate monetary policy in this environment requires a recognition that the economy evolves in unexpected ways.” Watching how The Fed handles this has been and will remain a talking point for us for some time. Stay tuned…

For the year, through March 15th: 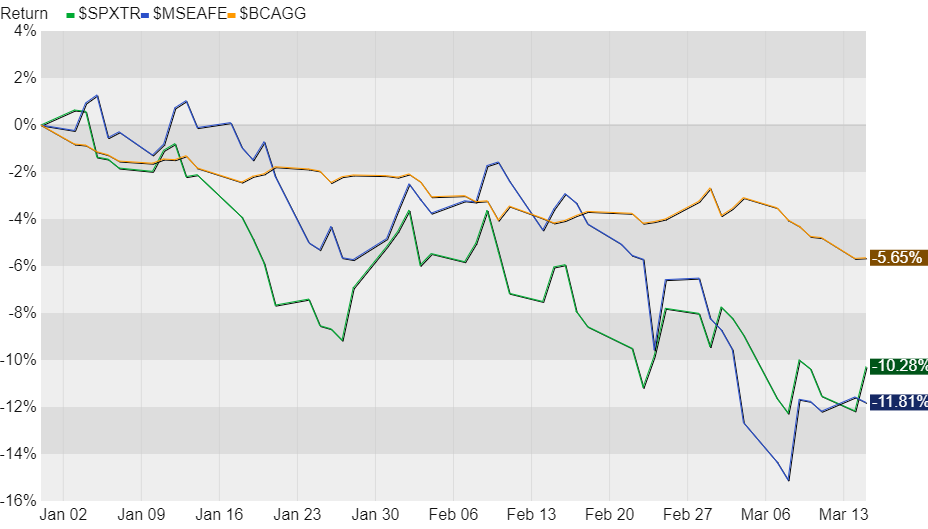 Investors seemingly have a lot to worry about from inflation, slowing growth, increased volatility, and war overseas. It’s a stark reminder that some of the biggest market risks are the ones that we do not see coming. To start 2022, a war in Ukraine probably would not have made my top 20 list of annual market risks, yet here we are.

At the same time, labor markets are strong, the Covid story has receded, and financial conditions remain loose. It’s easy to get caught up in the emotions surrounding negative headlines. Remember, though, panic often leads to awful investment decisions. In the short run, periods like these tend to make investors feel like we should sell and protect ourselves. In the long run, though, volatile periods like these tend to look like buying opportunities when we look backward.

We point that out not to call a bottom but to remind us that staying disciplined on an even keel usually leads to better investment outcomes. We know it’s not been a pretty start to the year, and we know it can look scary, but we’ve all been through times like this before, and unfortunately, we’ll go through them again. As we’ve often said, fear and greed are not investment strategies.

If you have any questions, concerns, or just want to let off some steam, we are here for you.

The Standard & Poor’s 500 (S&P 500) is an unmanaged group of securities that represent the stock market in general. The Bloomberg Barclays US Aggregate Bond Index is a broad base, market capitalization-weighted bond market index representing intermediate-term investment-grade bonds traded in the United States and is used for measuring the performance of the US bond market. Indexes are unmanaged and do not incur management fees, costs, or expenses. It is not possible to invest directly in an index. The MSCI EAFE Index is a stock market index that is designed to measure the equity market performance of developed markets outside of the U.S. & Canada. It is maintained by MSCI Inc., a provider of investment decision support tools; the EAFE acronym stands for Europe, Australasia and Far East.