The old adage “April showers bring May flowers” retrograded the calendar this year, as March showers, of cash in the form of stimulus, brought April flowers – in the form of market “bouquets” of performance bestowed on investors.

The story remains the same over the past year, with headlines and data driving the market.  This past month, most of it was good, as the effect of the stimulus made its way into the economy, and the ever-increasing vaccine numbers allowed for more and broader reopening across the United States.

Let’s take a look at some highlights

The New York Federal Reserve surveyed consumers early in the month and found that consumers saved 42% of their stimulus dollars. According to the survey, consumers also focused on paying down debt, with less than 25% of stimulus money used toward spending. Even so, the spending had an impact. The Commerce Department reported retail sales surged 9.7% in March, almost double what analysts expected.

The economy has been re-opening, and we can see that through the job's reports.  As of the end of March, there were 8.1 million job openings, which is the highest level ever recorded.  Businesses want to get back to doing business.  On the other hand, the high amounts of Government stimulus may be enabling people to stay at home.  Even though there are record job openings, Government aid such as the extension of the unemployment supplement income until September of 2021 most likely is disincentivizing people from returning to work. The April employment report was awful.  Employers added just 266,000 workers to payrolls compared to the 1,000,000 expected by economists, and the unemployment rate actually ticked up.  Still, in the future, we expect to see the unemployment rate improving.

Since 70% of U.S. GDP is consumer spending, increasing employment numbers and consumers with full wallets translated into upgraded projections of GDP growth. The IMF is now predicting the U.S. will see GDP growth of 6.4% - versus 5.1% for advanced industrial economies as a whole.

There is, of course, a fly in the ointment in the form of inflation raising its ugly head. Inflation increased 0.8% in April, which was the largest monthly increase since 2009 and much higher than the 0.2% forecast.  For now, the Fed believes a current inflation spike is temporary and will revert towards its long-term 2% target.

What does that mean for the economy? While we probably won’t reach the stimulus-fueled spending growth from March, we believe consumer spending will remain a strong point stemming from pent-up demand and improving household balance sheets.   All in all, with positive news on many fronts and the Federal Reserve reiterating their commitment to maintaining low short-term rates and continuing bond purchases until the recovery is more mature, growth appears poised to continue.

Despite some recent volatility, stock markets have started the year strong.    Through 5/11/21: 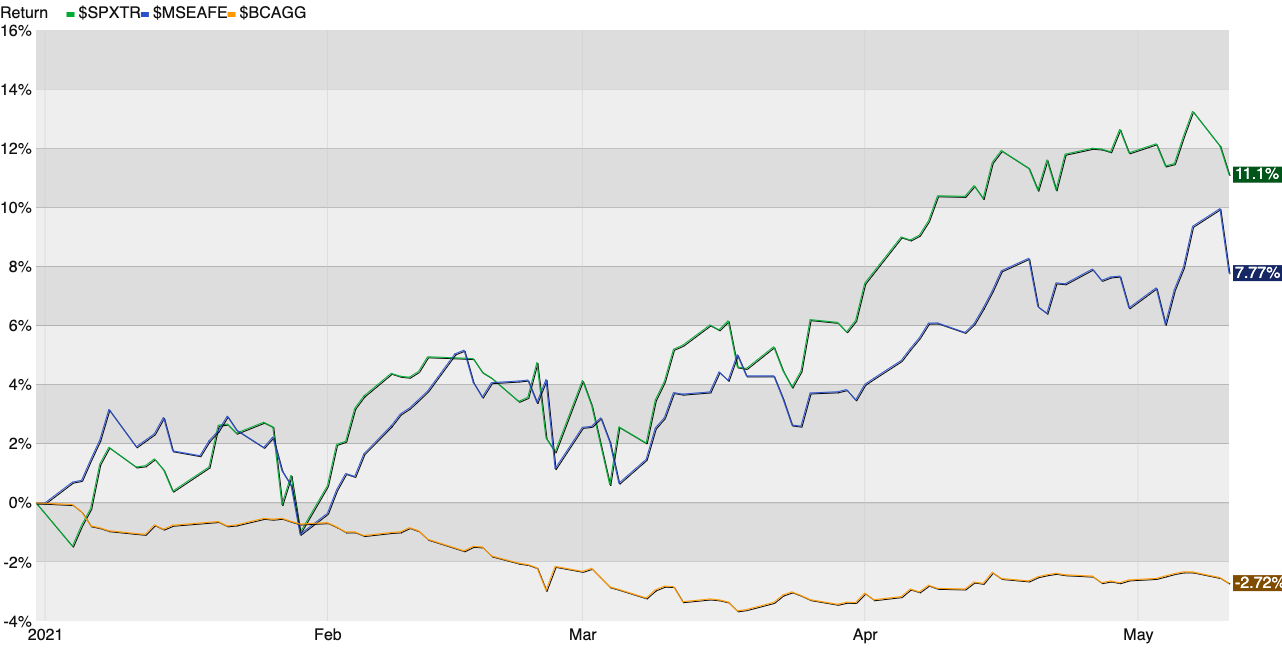 Based on the 425 companies of the S&P 500 that have reported as of May 6th, the Q1 earnings season is fantastic.  Roughly 86% beat their earnings projections.  That is important; stock valuations are generally higher right now compared to historical standards. For the market to continue achieving solid returns, company earnings growth must continue.

However, they may get some help from more government spending on infrastructure and families. If passed, the prospect of additional funding can boost growth in a broad swath of the economy.  Not only does the spending offer growth, but the ideas and plans surrounding covering the tab can create the potential for volatility. Talks and tax proposals are already making headlines.

Going forward, investors should pay close attention to company earnings and government legislation for both investment and tax planning opportunities.  For some people, it may end up making sense to accelerate income into 2021.

As always, if you have any questions and would like to chat, we are here for you.