You know the old adage; April showers bring May flowers. The showers this April were stormier than we’ve had in a while with the S&P 500 down nearly 9% in April alone.  That marks the worst month since March of 2020 when the Covid shutdowns started.   We’ve had the showers, but where are the flowers?

Chairman Powell Steps Up to the Plate – and the Mic

We’ve come a long way from a Federal Reserve that would speak as obtusely as possible and exclusively to economists and bond market people.

Powell spoke “directly to the American people” in his remarks. He was clear about his view of where inflation is and the Fed’s intention: "Inflation is much too high and we understand the hardship it is causing, and we’re moving expeditiously to bring it back down.”  Powell was also careful to stake out what the Fed sees as under its purview, as opposed to governmental control: "It's really the Fed that has responsibility for price stability."

The inflation fight looks to continue for Powell.  In April inflation declined slightly from 8.5% to 8.3%, still a high number, but it did moderate from March.  Time will tell if March was peak inflation, but for the market’s sake, we hope so.

Shortly after Powell took future 0.75% interest rate hikes off the table, the market spiked up, gaining about 3%.   As the news settled in, the market reversed, dropping about 3.7% the next day.  In other words, Fed statements and actions continue to be a big deal for the markets.

The US Economy Shrank

Unexpectedly, GDP estimates for the first quarter showed an annualized decline of 1.4%.  Economists were not expecting a booming quarter, but they expected a positive one, with polls estimating a 1.1% growth rate.  Looking at the underlying components of the report, the US trade deficit increased, negatively impacting the GDP, with imports from other countries increasing by nearly 20%, while exports decreased by about 6%.  Government stimulus is also waning, somewhat hurting GDP as well.  It wasn’t all bad; consumer spending and business spending were bright spots.  Remember, these initial GDP reports are estimates, so this one still has a chance of being revised up or down.

The technical definition of a recession is two straight quarters of negative GDP.  If revisions don’t bring 1st quarter into positive territory, that will be the first. but that does not necessarily mean we are already in a recession.   The Atlanta Fed’s GDP Now model forecasts the second quarter to show 2.2% GDP growth.

Amid the market turmoil, quarter one earnings for companies actually have looked good.  With about 87% of the S&P 500 companies having reported, about 79% have reported earnings that surprised on the upside.

The caveat is the focus on guidance.   At earnings calls, companies often give advice on how they think future quarters and years will perform.  More companies have been lowering their expectations rather than increasing them, and that has been punishing for some stocks.   For example, Netflix beat earnings estimates but forecast a loss of 2 million subscribers in the second quarter and the market price dropped over 25% immediately after. 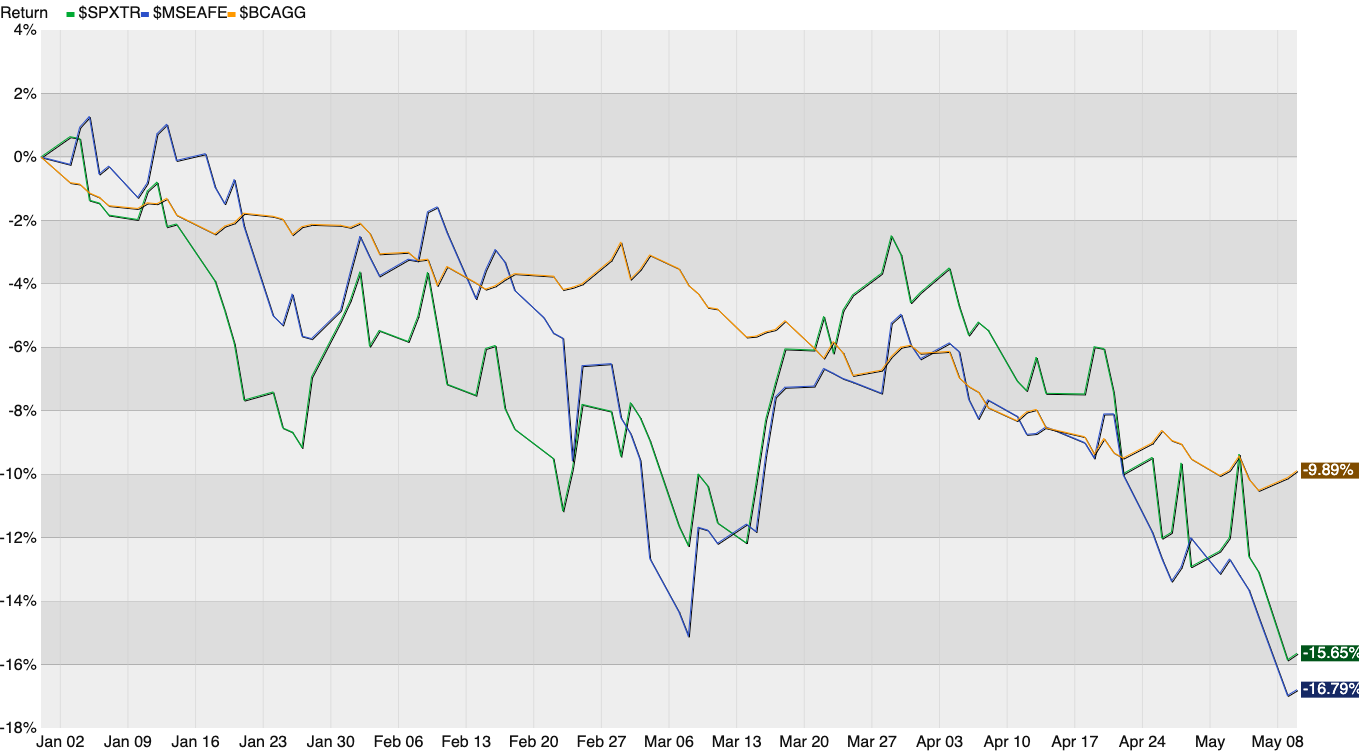 The recession risk is real.  Volatility has made itself home in our lives, and the markets have taken a beating recently.

It’s normal, natural, and OK to be worried.  Recently watching the market decline, checking your account balances, and hearing the news headlines feel like a daily gut punch.  Market corrections are not fun, but they are normal.

Since 1950, there have been 36 drops of 10% or more in markets, on average, about every 1.9 years.  Bear markets (market drops over 20%) are a lot less frequent, with only 15% of corrections since 1950 turning into a bear market.  It is very unlikely to predict the exact start and end of a downturn.   Worse for those who try, the best times often come immediately after the best, leading to a huge risk of eating the loss but missing the gain for those who try to time the market.

Keeping perspective is hard but important.  The cause of this downturn is certainly different than those we’ve experienced recently, but that can be said for pretty much every correction.  For every bear market and correction in the history of the stocks, the market has recovered and come out ahead.  There’s no reason to think any different about this one.

We say it a lot, but it’s at the core of what we believe.  Fear and greed are not investment strategies.  We are experiencing the fear end of the spectrum right now.   Keep things in perspective, stay disciplined, and remember you are in this not for the next few days, months, or even years.  You are invested for the long run.  If you want to talk, yell, scream, and commiserate, we are here for you.

The Standard & Poor’s 500 (S&P 500) is an unmanaged group of securities that represent the stock market in general. The Bloomberg Barclays US Aggregate Bond Index is a broad base, market capitalization-weighted bond market index representing intermediate-term investment-grade bonds traded in the United States and is used for measuring the performance of the US bond market. Indexes are unmanaged and do not incur management fees, costs, or expenses. It is not possible to invest directly in an index. The MSCI EAFE Index is a stock market index that is designed to measure the equity market performance of developed markets outside of the U.S. & Canada. It is maintained by MSCI Inc., a provider of investment decision support tools; the EAFE acronym stands for Europe, Australasia and Far East.

This material is provided as a courtesy and for educational purposes only. Investing involves risk including loss of principal.  Please consult your investment professional, legal or tax advisor for specific information pertaining to your situation. This article contains links to articles or other information that may be contained on a third-party website.  River City Wealth Management is not responsible for and does not control, adopt, or endorse any content contained on any third-party website. The information contained herein is derived from sources deemed to be reliable but cannot be guaranteed. Past performance is not indicative of future results.